This consultation has concluded. While the odor hotspot tracking map is no longer available, the Odor Control Hotline has been re-established and complaints or concerns can be shared directly with MillerCoors by calling 303-277-2112. 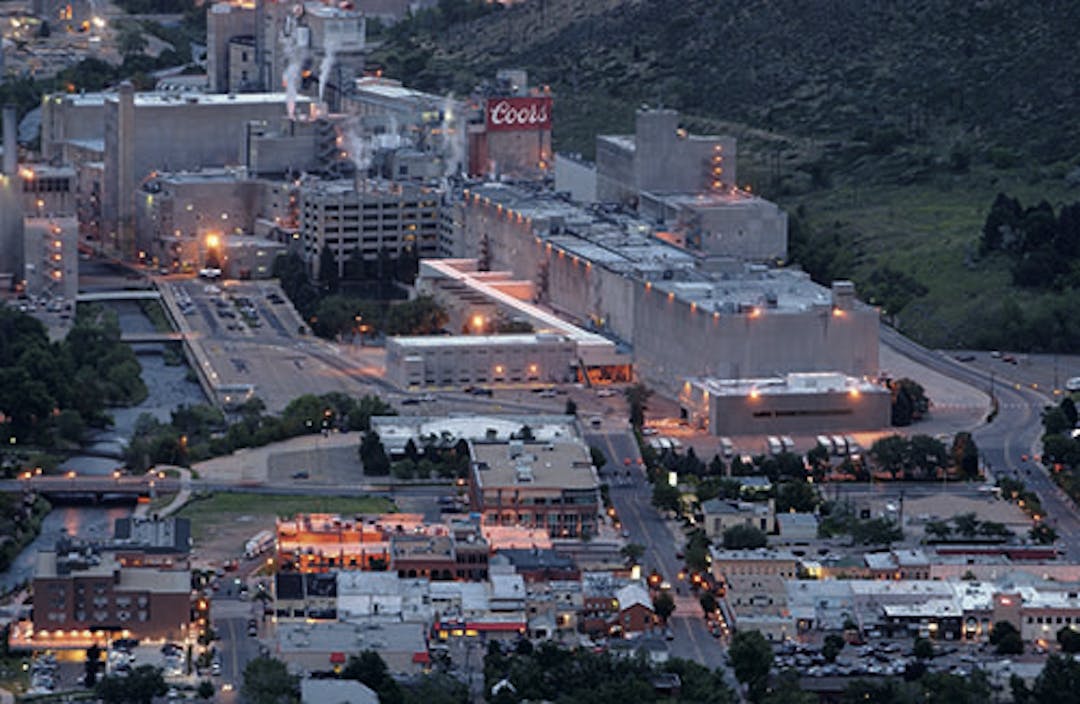 MillerCoors has the sludge storage facility scrubber working correctly and optimized. They have also optimized permanganate addition at the general wastewater plant. With the completion of these projects, they have completed the odor control projects they identified in their 2019 odor study. While operational modifications and other minor odor control projects may still occur, MillerCoors will now be focusing on upgrades and modifications to improve water quality of the discharges from the plants. Staff will continue to meet at least quarterly to discuss wastewater treatment. The Odor Control Hotline has been re-established and complaints or concerns can beContinue reading

MillerCoors has the sludge storage facility scrubber working correctly and optimized. They have also optimized permanganate addition at the general wastewater plant. With the completion of these projects, they have completed the odor control projects they identified in their 2019 odor study. While operational modifications and other minor odor control projects may still occur, MillerCoors will now be focusing on upgrades and modifications to improve water quality of the discharges from the plants. Staff will continue to meet at least quarterly to discuss wastewater treatment. The Odor Control Hotline has been re-established and complaints or concerns can be shared with MillerCoors by calling 303-277-2112.

Odor control activities recently have continued to focus on maintenance and/or repair of existing odor control equipment. Coors continues to work on the scrubber at the sludge storage facility. They have replaced the chemical feed system which did not have the results they had hoped for. They are now looking to replace the media in the scrubber.

Please continue to use the map on this page or the Coors Odor Control Hotline (303-277-2112) to report wastewater odors.

MillerCoors started feeding the oxidizer potassium permanganate this month as approved by CDPHE. This addition to the treatment process is providing some reduction of odor causing compounds, but will not eliminate them completely.

MillerCoors continues to perform stack testing of the scrubber at the sludge storage facility. This testing revealed that after several months of successful operation, the scrubber recently failed. The exact cause of the failure is currently unknown. However, MillerCoors is working with the plant operators, the scrubber manufacturer, and their chemical suppliers to investigate the problem and return the scrubber to efficient operation as quickly as possible. In an effort to more quickly identify or prevent future failures, MillerCoors is working to obtain handheld testing equipment, which will be used by plant operators, to test equipment operation for odor problems during each shift's regular plant walk through.

The aeration system at the process waste treatment plant surge tank that was previously identified as needing repair has been fixed. Unfortunately, the ionizer at the process plant continues to provide less than optimal performance. MillerCoors continues to work with the manufacturer and vendor to improve performance of the device. However, optimization of this device is slow and its overall usefulness is questionable.

MillerCoors received approval from the State Water Quality Control Division for the treatment change at the general wastewater plant to add a chemical oxidizer. This approval had been pending since late 2019 and is effective October 1, 2020.

MillerCoors conducted another round of stack testing last week. The testing was focused on the scrubber at the sludge storage facility to measure the effectiveness of the work performed there in July. In addition, testing focused on the process wastewater plant as part of ongoing efforts to calibrate odor modeling and to use data to drive future projects.

The current focus is on the process wastewater plant. The ionizer that was installed earlier this year as part of the treatment optimization efforts has not lived up to its potential and MillerCoors is working with the supplier to see if it can be improved. There is also a capital maintenance project planned on the aeration system in the surge tank at the process wastewater plant that is expected to help. Some “before” data at both of these locations was part of the stack testing effort.

MillerCoors has completed the effort to review and optimize existing operations and equipment. Of note in this project, the scrubber at the wastewater sludge storage building was completely overhauled. Sludge storage is a significant source of odors and air quality monitoring before and after this maintenance project indicates that this may make a noticeable difference in odors. MillerCoors has added H2S monitoring to equipment inspections to track equipment operations and assure improvements are maintained.

MillerCoors has been doing stack testing and comparing results to modeling done earlier. This will be used to make decisions about new investments in capital equipment.

Finally, MillerCoors has a maintenance project planned in early August on their truck scales. This will limit their ability to haul sludge and will result in temporary storage of wastewater sludge at the process plant on Hwy 58. There may be a temporary, noticeable increase in odors as a result.

MillerCoors provided an update on odor control efforts. Unfortunately, both the short-term process change and long-term capital program remain pending. The State has not approved the treatment change to allow the addition of oxidizers. MillerCoors is ready to implement this change as soon as it is approved. The capital improvement project has been delayed while the brewery collects additional air quality data. The commitment to install control equipment remains, but there is a push to make sure it is the correct solution at the correct location.

In the meantime, MillerCoors has gone back to the existing systems to look at what they can do to minimize or control odors in the interim. They are bringing some older, out-of-service control equipment back on line, optimizing other processes or equipment to improve odor control and minimizing sludge inventory on site. The inventory is likely the optimization that will make the biggest difference.

Our next call is in July.

MillerCoors has implemented the operational changes from the odor study. These have focused on sludge handling and volumes and completing maintenance projects that optimize operations and reduce odors.

MillerCoors continue to negotiate with the State Water Quality Control Division for approval of modifications to the wastewater treatment process that would allow the addition of chemical oxidizers to reduce odors at the general wastewater plant. These modifications can be implemented relatively quickly once approval is received, but the process has taken longer than expected.

Design is complete for a longer term capital solution. This is a project that would add a scrubber to the process wastewater plant. Local brewery staff are working hard to fund this project, but company-wide capital spending has been reduced as a result of the COVID-19 response. Should funding be approved, the lead time on this is 8 to 10 weeks.

UPDATE (4/1/20): MillerCoors has completed an odor study at the wastewater plants and solids handling facilities. Earlier this year, they received funding to move forward with detailed design on a long-range odor control project. There is no schedule for implementation at this time. Staff continues to get regular updates and will share additional information when it is available.

UPDATE (11/22/19): Golden and MillerCoors staff had a routine update call on November 22. MillerCoors is moving forward with the short-term solutions they identified to address odors. They intend to modify the wastewater treatment process to include chemical addition of an oxidizer, however such a modification requires State of Colorado approval. The actual timing of the change depends on when MillerCoors receives approval from the state.

MillerCoors is also working on long-term solutions. Their consultant is on schedule for delivery of a final report in late December. That report will include recommendations and costs for projects at both plants to address odor sources identified by the consultant’s evaluation. MillerCoors intends to pursue funding based on recommendations in the report in February, with the potential for implementation later in 2020. Golden’s next call is scheduled for January 2020, which will be a good time to firm up projects and implementation timelines.

MIllerCoors plans a treatment change – the addition of an oxidizer – that can be installed by spring. This change will require approval by the Colorado Water Quality Control Division and the start date will depend on when MillerCoors receives that approval. In the meantime, MillerCoors continues to staff the Odor Hotline (number below) and keep Golden staff updated on other long- and short-term odor solutions.

Please continue to report odor hot spots on the map below. This tool has been helpful to Golden and MillerCoors staff in understanding odor issues and days when odors are more noticeable in the city.

UPDATE (8/29/19): On Wednesday, August 28, 2019 at a meeting with MillerCoors representatives, City Council shared frustration regarding odor at the wastewater treatment facility. Multiple concerns were expressed regarding this summer’s odors. The MillerCoors waste water treatment facility treats some waste water from the City of Golden, and treats brewery waste. MillerCoors indicated that they are aware of odor concerns and expressed willingness to evaluate plant modifications to reduce odors.

Staff from the City and MillerCoors met later the same day. During that meeting, the following commitments were made:

Jefferson County Health Department conducted odor monitoring at the brewery on multiple days. This monitoring did not show any health violations at the brewery. While the health department inspections lead to no violations, MillerCoors affirms its commitment to the work to minimize the emission of odorous gasses.

Noticed the sewage smell especially strong somewhere? Tag the map and let us know where. We'll pass the information along to MillerCoors, which will help them pinpoint problem areas and work on fixing them.

CLOSED: This map consultation has concluded. To report wastewater odor complaints or concerns, please call the Odor Control Hotline at 303-277-2112.